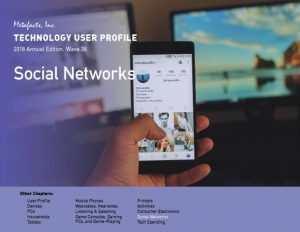 Connecting with others is a basic human need, and social networks facilitate that. However, not all social networks draw the same market segments. Knowing which market segments are and are not a network’s active networks is a key to understanding. Also, users are beginning to supplement and even replace their activities on other platforms, from communication to entertainment. This highlights the sea change of where users do and don’t focus.
This chapter includes relevant answers selected from the many questions in the comprehensive TUP survey. The market is split out by social network actively used: Facebook, Twitter, Pinterest, LinkedIn, Google+, and those using any major social network except Facebook. The data-rich deliverable is designed for quick recognition of important findings, including statistical testing and indexes comparing values to their national averages. This report results cover many key topics: user and household demographics, technology adoption (early adopters to laggards), Social Networks actively used, Devices, Activities (Social Networking, Communication, Shopping, Entertainment, Graphics/Image, Information/Search, Cloud Storage/Sharing, Personal/Productivity), Technology Spending, and Purchase Plans.

The MetaFacts TUP syndicated survey, conducted continuously since 1983, is based on the full range of technology users – those who connect to the Internet through PCs, Mobile Phones, Tablets, or Game Consoles. It spans consumers, employees, the self-employed, students, and even users of public/shared devices.
This document includes over 250 pages in PDF and Excel, featuring cross-tabulations which may be used for market sizing, user profiling, benchmarking, and to support many decisions. Please also refer to the many other chapters and sections of TUP, particularly Chapter D – Devices and Chapter L – Activities.

The Social Networking chapter of Technology User Profile (TUP) 2018 has one main section:

Key questions addressed in the Social Networking Chapter of TUP 2018 include:

Other Chapters in the TUP 2018 Full Edition include: